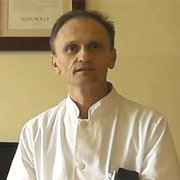 Branko Fila was born on August 30th 1964 in Pakrac, Croatia. He graduated from the University of Zagreb School of Medicine in 1990. In 2001 he became a senior general surgeon and in 2010 a vascular surgeon. For twenty years he was working in General Hospital Bjelovar and since 2015 he has worked as vascular surgeon in University Hospital Dubrava, Zagreb, Croatia. His special area of interest is vascular access procedures for hemodialysis. He attended many meetings regarding vascular access for hemodialysis with passive and active attendance. In 2017 he finished his PhD study with the dissertation titled “Vein diameter after intraoperative dilatation as a predictor of success of arteriovenous fistulas for hemodialysis“. He is on the reviewer list for the following journals: American Journal of Nephrology, Therapeutic Apheresis and Dialysis, Renal Failure, SAGE Open Medicine, Medical Science Monitor. His special interest in the last three years focuses on quality assessment in angioacces procedures. Branko Fila is a member of many societies. In 2017 he became a Council member of the Vascular Access Society.

Quality assessment of vascular access procedures for hemodialysis: A position paper of the Vascular Access Society based on the analysis of existing guidelines
Key published article (PDF format)